Home » P4C: The value of the bad example 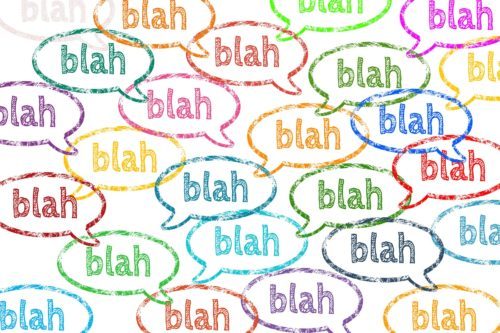 We’re often asked for ideas to deepen pupils’ thinking. For tactics to move their discussions on from interesting chat to richer philosophical dialogue. One way is show a ‘bad example’ of philosophy. Perhaps where a particular skill is absent, or where participants are locking horns on a concept without actually defining it.

It’s common sense that something’s absence can often draw attention to that thing. It’s why we try to slip away quietly from dinner parties. And we have figures of speech like ‘Absence makes the heart grow fonder’ or ‘She was conspicuous by her absence’.

To bring pupils’ attention to a particular thinking skill or philosophical move, give them examples of discussions that lack it. This could be something you’ve spotted in the media, or created yourself for this purpose.  It’s fairly easy to spot ‘bad examples’ in today’s 24-hour media. You could illustrate the importance of listening by showing a debate where political-point-scoring is prioritised at the expense of genuine responsiveness. Or incorporate some drama by getting pupils to act out mini-debates in pairs, but lacking an all-important skill like eye-contact or passion. For younger children, perform a debate with another member of staff. It’s terrific fun.

These can serve as stimuli, or a warm-up. However, ‘bad examples’ are not only useful for the classroom. By virtue of its absence, they can remind us what skillful facilitation looks like. When listening to debates on the news, I often have to fight the urge to tell someone ‘what they really need to establish is...’ and go off on a rant of how I would facilitate the discussion. The most recent example happened at the weekend:

It’s broadcast immediately after football has finished for the day, so usually involves a clash of fans’ raw passion with Savage’s unshakable faith in his own opinion. The standard of debate isn’t very high, but it’s hugely entertaining.

On Saturday’s programme, both Mohammad and Savage became embroiled in a lively back-and-forth with a caller. It caught my ear immediately. It was crying out for a particular thinking move. A move that we can actively probe for to deepen our pupils’ thinking. In this case, its absence illustrated its importance. Here’s the transcript:

The caller is a fan of Leicester City. After winning the league against all odds last year, they have made a difficult start to this season, and currently sit 15th in the table.

Mohammad   There is an argument that you over-achieved last season.

(Lots of talking over each other)

What if they had paused to reflect on what ‘over-achievement’ actually meant? The caller began to about half-way through, but was soon shut down. A deconstruction of the term would have led to fresh perspectives and much deeper discussion.

With a closer inspection of what the term meant, the three may have achieved some consensus, or at least understood how and why they disagreed. Instead, it was like the equivalent of two blindfolded boxers exchanging missed punches.

If you spot a similar pattern occurring in your classroom, don’t be afraid to encourage pupils to establish criteria for the terms they are using. This is especially valuable with ambiguous terms like ‘better’ or ‘worse.’ Better in what sense? Worse for whom? Once this has been modelled, it’s likely they will start doing it for themselves. And dare anyone’s heart not to sing when they hear a pupil say ‘I think we need to stop and work out what x actually means…’

Consider using ‘bad examples’ in your classroom. And listen out for them yourself. If you spot one, put yourself in the facilitator’s shoes. It’ll be a helpful reminder for next time you come across a similar situation in class.

As for this phone-in, I can’t help but feel the discussion under-achieved. If there is such a thing.