About The Philosophy Man

Whilst teaching English at Sutton Grammar School, Jason Buckley rotated around Year 7 forms, facilitating discussions off the back of philosophical stories. These were popular, and years later when he was looking for a name for his new organisation, he remembered one boy exclaiming “Yay, it’s the Philosophy Man!”

Jason is now a leading writer, trainer and practitioner in the field of Philosophy for Children. He has written popular, compact how-to guides for teachers as well as a wealth of stories and other stimulus materials for use in the classroom.

Tom Bigglestone is a vastly experienced Head of Department and member of the Senior Academic Management Team at a former school. He specialises in Religious Studies, Philosophy and classroom dialogue. In 2014, he was awarded the prestigious Walter Hines Page Scholarship by the English-Speaking Union to research the role of assessment in philosophical discussion.

From small beginnings in 2008, The Philosophy Man is now the UK's leading independent provider of P4C training and workshops. Jason and Tom send free p4c resources to over 17,000 educators worldwide, and train upwards of 2,000 teachers a year through INSETS and Keynotes in our streamlined and accessible Philosophy Circles approach to P4C. We spend as much time in the classroom as we do delivering courses, and we ‘show our working’ in front of children of all ages.

We’re extremely keen to make sure we don’t just turn up, trouser our fee and disappear without leaving much behind. We put a lot of energy into creating memorable, interactive sessions supported by practical resources. For example, all school bookings come with 100+ pick-up-and-go session plans for every subject in the curriculum; a Philosophy Circles handbook for every member of staff, as well as Thinkers’ Games minibooks. More about our Philosophy Circles training can be found under Training.

We are continually creating new resources, sharing improvements to the training and expanding our horizons. We’re training more teachers, delivering more workshops, and giving more presentations than ever before, and this year have started working in Singapore, Oz and NZ. 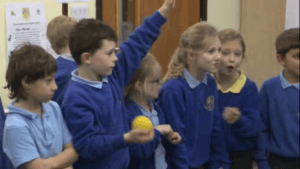 If children don't learn to talk confidently to groups in their primary years, it's unlikely they ever will. It impacts their learning and their economic and social potential.

Handouts from training courses often sit in the "INSET graveyard'. It's full of ideas that sounded great on the day but which never quite got passed on to colleagues. So we want to deliver training minibooks that with busy teachers in mind, and following the course our huge range of resources means there's every support for you and colleagues continue using P4C regularly.

When we work with schools that have already tried Philosophy for Children, we often get feedback such as, “When we had philosophy training before, we wanted to do it. But now we know how to make it work.” So we created Philosophy Circles.

In Philosophy Circles, the facilitator usually asks the first question, so the discussion gets started faster. The children’s own questions are still important, but they emerge through discussion. Rather than stages, Philosophy Circles is built around three facilitation principles which run through the whole process. It makes it more fast-paced and versatile for use across the curriculum. Everything we do is based around this unique approach.

We have worked with hundreds of schools - why not join them? Drop us a line today.

Can homework be fun? We think we've cracked it (and teachers, pupils and parents agree!)

Learn more about us

The Founder and Director of The Philosophy Man. A life-long philosopher and former teacher, English, Jason is now an internationally renowned trainer, writer and speaker on P4C, classroom dialogue and stretching the more-able. He is author of three books, with more in the pipeline. Jason is also Director of Studies at GIFT, and also an outdoor education company, Outspark. In his spare time, he's a storyteller and improviser, and all these skills come together in his lively training, with minimum of Death by PowerPoint. Read more.

Tom's courses are incredibly well-received as he continues to work with classes week-in, week-out and train teachers across the world. Tom has been Head of Department at both primary and secondary level, and in both the maintained and private sector. He's also an expert facilitating discussions about the news - after working for three years at The Economist newspaper. He has specialised for several years in P4C, and in 2014 was awarded The Walter Hines Page scholarship, for which he spent time in the United States researching assessment of philosophical skills.  Read more...

Got a question about P4C at your school?

If you are interested in pupil workshops, staff training, or have a question about P4C, please fill in this form. We'll get back to you as quickly as we can.