This week, three summarised enquiry plans for a P4C on Robots, all using video stimuli from news or film. Are there some jobs robots could never do? Who is to blame if a robot car does not allow
for human error? Could you ever love a robot? Could a robot love you? 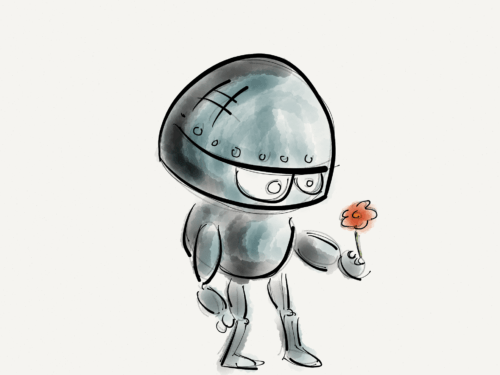 Philosophy with Robots
Teachers at a conference this week chose “Robots” as a topic to put through the Philosophy Circles topic processor. By coincidence, this morning, the first of these videos appeared in Jason’s facebook feed. Here are the concepts, Y-questions and stimuli around which you could construct an interesting topic.

EFFICIENCY
Y-Question: Are there some jobs robots could never do?

Get Moving starter activity:
Pair up. One in each pair is the robot, the other gives instructions for putting on a shoe, making a cup of tea or other action. Robot can only do exactly as told.

RESPONSIBILITY
Y-Question: Who is to blame if a robot car does not allow for human error?

Get Moving starter activity:
Philosophical consequences. Start with the statement, “If all cars drove themselves, then…” and invite someone to finish the sentence. Then take their suggestion as the “if” of a new sentence, e.g. “If all the taxi drivers lost their jobs…” and repeat. After the game is established, split into small groups and continue, so that each person has the chance to add a “then”, and then see where the different trails of imagined
consequences get to.

PERSONALITY
Y-Question: Could you ever love a robot? Could a robot love you?
(Note that this double Y-question is open to four combinations of answers e.g. “You could love a robot but it couldn’t love you.”)

Get Moving starter activity:
Pair up. For thirty seconds, one in each pair lists things that make a good friend. Then swap.