Home » The Game of Power

This week, a powerful stimulus for discussing power. It’s taken from Augusto Boal’s “Games for Actors and Non-Actors”, one of the best books ever written for doing thoughtful work with groups.

Warm-up: This is Not a Spoon
This is an excellent activity to get people thinking about what an object can represent, ready for the main stimulus.

Some of the interpretations might be general – “That one is in charge and the others have to do what they say,” but perhaps more helpful are specific scenarios, “That one is a guard in a tower and he’s looking down on the prisoners.” 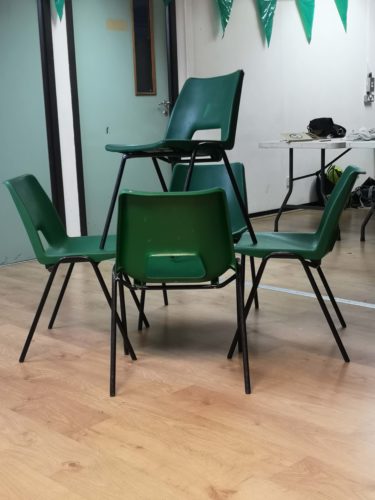 In the course I did with Tony Cealy (www.tonycealy.com). I found thinking about this arrangement quite affecting. It made me think of all the situations in which someone in a position of power doesn’t even see that they are “stepping on” other people. Another arrangement, with four chairs facing one, suggested either a classroom or a checkpoint.
After you have heard some different interpretations of one arrangement, hear from the person who created the scene. Then get someone else to arrange the chairs in a different way and repeat.
Questions
The stimulus lends itself to getting the group to generate questions, or you might ask:
Where does power come from?
When does one become more powerful than many?
Does/should/will power always get concentrated in the hands of a few?
If power is shared, is it less powerful or more?
Best wishes,
Jason
PS For those of you teaching or raising secondary age students who have bright, curious minds, the GIFT Easter School is running at Grittleton House, Wiltshire on 5th to 10th April. Bursaries are usually available for those who would otherwise be unable to go. https://www.giftcourses.co.uk/gift-easter-school-2020 Archaeology, anarchism, radio telescopes and Roman art are four of the sixteen courses on offer!
Posted in News