Home » P4C Back to School Activity: Who Believes What?

Most readers will have another week of holiday left before going back to school. A mathematical/philosophical question – if the pre-term preparation you could do feels infinite, won’t infinity remain the same size if you have another prosecco in the sunshine instead?
r
When term does start, attached is a philosophical version of the perennial “Signatures” game. Participants move around the room, trying to get a signature from a different person who believes each of the listed statements (or names/initials if using it with younger pupils). After a few minutes, call an end to the activity, see if you can find the statements that divide the class the most, and use them as the starting point for some discussions.
r
It’s a good way to get people mixing, and while most classes already know one another, maintaining a positive community that is rich in communication requires constant re-investment of time.
r
Download the pdf by clicking the picture below: 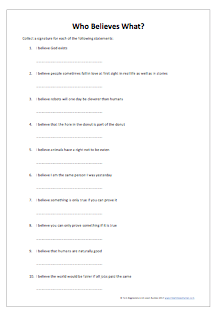 r
I believe that God exists
I believe people sometimes fall in love at first sight in real life as well as in stories
I believe robots will one day be cleverer than humans
I believe the hole in the donut is part of the donut
I believe animals have a right not to be eaten
I believe I am the same person I was yesterday
I believe something is only true if you can prove it
I believe you can only prove something if it is true
I believe that humans are naturally good
I believe the world would be fairer if all jobs paid the same
r
You could also add another round where pupils devise belief statements themselves, for which they then collect signatures. The challenge is to come up with statements that get a mixed response, and therefore won’t always be believed by the first classmate approached. To take things even further, you could request that their own written statements be ones they personally believe. Tell them that if they find someone who disagrees, they should have a mini-debate to see if one can change the other’s mind.
r
Best wishes,
r
Jason and Tom
r
PS If you order resource packs, books or DVDs from our website within the next few days, we will post them out straightaway so that UK schools should have them in time for the start of term. Packs of 5 copies of the new Philosophy Circles minibook are a popular choice, as they are a great way to refresh your P4C or start to experiment. Find these and other resources at www.thephilosophyman.com/shop
r
This is one of our free P4C resources that can arrive direct to your inbox, every week. Just click that link to sign up!
Posted in News