Home » The World Cup of Every Idea

Hello from Tom this week, sharing a debating game that whittles any list of potential answers to one.

The World Cup of Every Idea

It’s a more serious version of Richard Osman’s “World Cup of Everything”, which I played with family on New Year’s Eve. In the original game, participants choose a category of 16 “things” – we chose crisps – and are tasked with working out which is the best of all by process of a knockout tournament. Each tie is debated, voted on, and the winner of each tie goes through to the next stage.

Here’s an example ‘wall-chart’ from the book for another category: Americans! 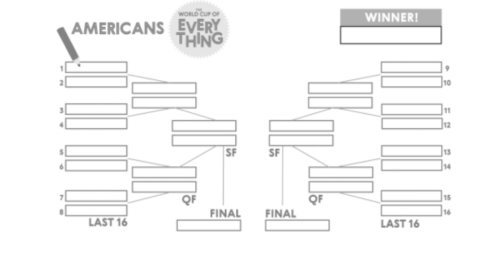 Teaching a lesson on the purpose of life earlier this week, I realised this same game played can be played with a P4C question that has several possible ideas as answers. It’s a fun and energetic way for the class to explore the merits of each idea. The numbers below assume a class of 32 but you can adjust for your class size.

Try following this model:
Ask the question: for example, “What’s the most important purpose of life?”

Outline 8 possible answers (or even better, get students to suggest them) and put these into four “quarter finals”:

Caring for the environment vs reproducing.
Enjoying the company of others vs exploring the universe.
Helping those less fortunate vs looking back on life with contentment.
Achieving a religious goal vs caring for one’s family.

Have four groups of eight debate each tie, 4 vs 4 with assigned sides. They could
do this in front of the class but doing it at the same time would create more engagement. After a few minutes ask them to do a “Brainstand” and reverse the sides so they now argue for their opponents’ perspective.

Let each group then vote for the winning idea, so that they then move from the artificial speaking phase where they have been told what to argue for, to the sincere phase where they show what they really think, having given and heard arguments for both sides.

On to the semi-finals
Get the players from each “match” to briefly feed back what arguments influenced their decision – or indecision, if they are tied two votes each way. In that case, the rest of the class can vote to break the deadlock. Each winning idea goes through to the semi-finals where you repeat the format but with 8 vs 8.

Once two finalists have been chosen, one half of the class can debate the other for the overall winner! You can then open up the question into a wider discussion, perhaps adding in any other answers they have that were not part of the original tournament, and the discussion is likely to be much richer because of the preceding lively encounters.

You might recognize the same “snowballing” principle from the Christmas issue which you can see here:

What’s the most important quality in a friend?
Kindness, loyalty, generosity, care, similarity, honesty, gratitude, compassion.
…or anything with 8 possible answers!