This page brings together the accumulated Christmas specials we've sent out over recent years. You can get thinking stories and resources all year round by signing up for the free P4C resources we send out on our bulletin. If you like the resources here, please share this page, with colleagues. The video (just audio with a photo) below is our 2021 Christmas special, others from the back catalogue below.

We are entering the season of the Christmas Special, when familiar TV shows take on a celebratory feel with bigger and brighter versions of their usual offerings. Could you run a “P4C Christmas Special”, perhaps with a whole-school stimulus acted out in an assembly and simultaneous enquiries running across many classes? “Rudolph’s Revenge” (pasted below) is just for two people, so makes an easy and colourful assembly performance - just add antlers!

The stimulus is as an encounter between a Rudolph whose celebrity has gone to his head, and a Santa who may have overestimated his merits as an employer. As with last year’s Elf dialogue, it recycles the lyrics of a Christmas song.

It’s largely a bit of fun but does also invite questions such as:
r
Is fame a good thing?
What makes a good boss?
Should Rudolph still pull the sleigh?
How loyal should you be?
What do you owe the people who make you a success?
Who is responsible when someone succeeds?
If someone’s job is being famous, is it still work?
r
SANTA           Ho, ho, ho! Rudolph with your nose so bright, won't you guide my sleigh tonight?
RUDOLPH     That’s right, I won’t.
SANTA           What?
RUDOLPH     I’ve had a better offer. I’m co-presenting a Christmas special on national TV.
SANTA           But how will I deliver the presents? It’ll be disastrous. You’ll go down in history.
RUDOLPH     Don’t be so dramatic. Dasher and Dancer and Prancer and Vixen, Comet and Cupid and Donner and Blitzen can’t wait to pull the sleigh without me. They just pretended to love me because I’d hit the big time. But I’m too famous to join in any reindeer games.
SANTA           Aren’t you being rather ungrateful? Remember, I made you a celebrity.
RUDOLPH     Nonsense. It’s Rudolph “the” red-nosed reindeer, not Rudolph “a” red-nosed reindeer. I’m unique. Cream always rises to the top. I’d have made it with or without you.
SANTA           But pulling my sleigh is the greatest honour a reindeer can have.
RUDOLPH     Typical! Trying to get the creative talent to work for nothing because it’s good publicity. Do I get free moss by telling the supplier “It’ll be good exposure for you?”
SANTA          Think of the children!
RUDOLPH     What I think is this: I’ve got the world at my hooves, then one foggy Christmas Eve, I hit a satellite, and all at once it’s “Rudolph the red-nosed reindeer had a very shiny nose. Now he’s the odd one out in a donkey sanctuary.”
SANTA          Haven’t I always looked after you?
RUDOLPH     Not particularly. Do you recall when all of the other reindeer used to laugh and call me names? No, because you never asked how I was.
SANTA          You should have made a complaint.
RUDOLPH     So now it’s my fault! Blame the victim! Anyway, do you realise how humiliating it was, sitting around on a zero-hours contract hoping for a nightshift? The hours I spent polishing this nose, thinking “If you ever saw it, you would even say it glows…”
SANTA           I’m sorry, I didn’t realise.
RUDOLPH     No, well you do now. I don’t need you any more. I’m the most famous reindeer of all. If you want to make a booking, speak to my agent. I’m doing Strictly next year. No more “poor Rudolph” for me!

“URNE1”, a philosophy through creative writing session. Your writers continue a series of diary entries about a child who receives an artificially intelligent playmate and has to choose its settings; then use their speculations as a stimulus for enquiry.
r
Download it here.

Would it be better if it were Christmas every day? Here’s a video that asks that question, from our forthcoming series for young children. It’s ready for immediate use with your class.

Traditionally one should be leaping into the new year armed with clear resolutions about taking action. But that’s not very philosophical, so here instead are some quandaries that invite irresolution, confusion and debate.
r
1. Would you Wish it Could be Christmas Every Day, or prefer that Grandma Got Run Over by a Reindeer?
r
2. If British Values are democracy, the rule of law, individual liberty, respect and tolerance, which one wins if they have a fight? [This sounds facetious but is the probably the best way to salvage some real thinking from this propaganda initiative].
r
3. Metaphors can be a powerful start to enquiry or to private reflection. Which in the following list best describes what life should be:
r

And which best describes what life is. Are they different? If so, why? And is there anything that could make both answers the same?

2013: Explaining Christmas to An Alien

You are one of a band of intrepid philosophers travelling the galaxy in search of a new world. You stop off to get Christmas supplies - but the aliens aren't sure this Christmas thing is at all good for you...

This is a bonus episode for the Philosophy Quest "Alien Adventures in Philosophy".

Here's the podcast (may take a while to load, but you can click play while it's still loading):

Or right-click this link to download it:
Explain Christmas to An Alien

Or here's the print version.
Explaining Christmas to an Alien

The brave know us well
But cowards fear us.
The wise greet us with smiles
But frown if we stay.
We are great teachers
Of ungrateful pupils.
Those who make us hide us
Those who do not, hide themselves.

Players stand in a circle around the facilitator. Each player holds his left arm out to the side, palm open and facing up. Then he places the middle finger of his right hand touching the palm of the player to his right, pointing straight down. When all the players are connected in a chain like this, you are ready to begin.

When the facilitator clicks his fingers (and not before) players simultaneously try to trap the finger of the player to their left by closing their hand, and avoid getting their finger trapped by the person to their right by pulling it away. Each player keeps his own score. Make a point of the absolute silence before you click your fingers. 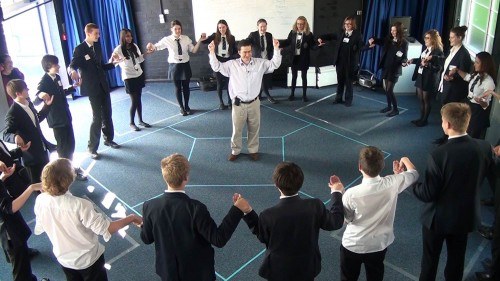 My favourite fun thinking activity, used from primaries to PRUs with great success.

Spot and Stripe: Christmas from Jason Buckley on Vimeo.

The Christmas Hat puzzle (very fiendish) I put up on this page last year proved so popular that I have added another elaborate one, the Princess and the Golden Key (quite fiendish). Both of them are available in Powerpoint and PDF versions. I've also added a three-pager with 25 Brainstretchers of varying levels of fiendishness, and a separate document that includes the answers.

You can download everything in one zip file by clicking Brainstretchers and Puzzles. Or click on the individual files below.

Puzzles are under-used because they seem frivolous, but they are excellent ways to get dialogue and collaboration going. Step back and let each speaker choose the next, giving priority to people who haven't said so much - it's a key move in shifting the focus away from you to them working as a team.

The hat puzzle requires both logic and empathy, and is more for secondary than primary pupils, but a good one for colleagues in any staff room to enjoy puzzling over. The Princess is a bit of an unknown quantity - it's brand new, though based on an old one. I hope you enjoy them. 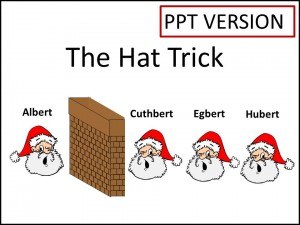 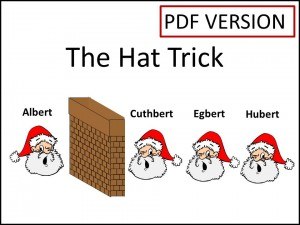 Here's how one teacher used them:

"Used the Hat problem with my Y6 class today. Although no-one worked it out at first, when we did it practically, the person in Egbert's place shouted out, "It's me- I'm yellow" and she was able to explain to the others how she knew! The Princess one was more manageable for them, most knew it was to do with weight (apart from those who thought about using a magnet). Once again using practical equipment they were able to work out the complete solution.

Have also read out some of the Brainteasers whilst we were waiting behind after the Christmas Carol Service- some needed an additional clue, but all the first sheet were solvable. Even the staff had a go!"